PANICKING Paddy Power are staring down the barrel of a £15MILLION payout if Rachael Blackmore wins the Grand National.

Sweating bookies say the chance of Cheltenham Festival’s top jockey winning the world’s most famous race has given them their biggest headache in nearly a decade.

Blackmore, 31, is one of the three women jockeys bidding to become the first female to win the contest.

OFFERS OF THE DAY

Paddy Power: New customers only. Place a £10 bet on any Sportsbook market, at odds of at least 1.5 (1/2) — and we’ll give you £10 in free bets. Free bets are valid for 30 days and must be used on a Sportsbook market. Free bets will be awarded after the qualifying bet has been placed. Only deposits made via cards or Apple Pay are eligible. T&Cs apply. 18+ Begambleaware.org

She rides Minella Times, currently around 9-1, in the big one at 5.15pm on Saturday.

Blackmore’s horse was first backed for National glory at monster odds of 40-1 in February.

But since making history at Cheltenham as the first woman to be crowned top jockey, punters have been pouring in.

It is reminiscent of Katie Walsh on Seabass in the 2013 National, who was double-figure odds before being backed to 11-2 favourite.

That horse, who came third in 2012, eventually finished 13th.

Bookies say the prospect of an eight-figure payout on Blackmore is giving their traders sleepless nights.

Paddy Power spokesman Paul Binfield said: “Girl power could nail us to the wall with history being made and we could be staring down the barrel of a £15m pay out come 5.15pm on Saturday. 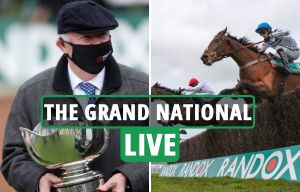 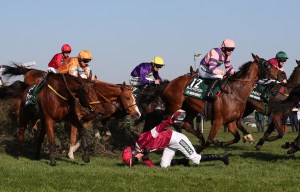 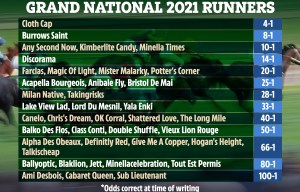 Grand National 2021 runners: Line up announced with The Storyteller OUT 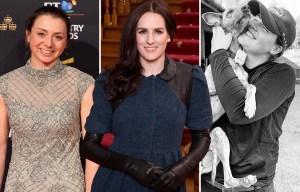 Blackmore, Frost and Worsley battle to be FIRST female winner of Grand National 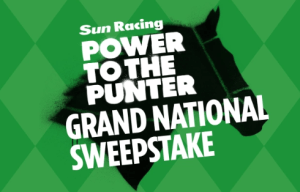 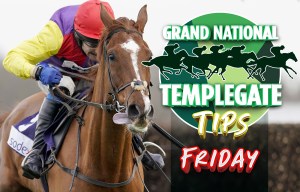 “To put it into some kind of perspective our traders haven’t experienced a headache like this since 2013, when Katie Walsh was backed into favouritism on Seabass, and there are echoes of that with Rachael’s Cheltenham heroics having huge popular mass market appeal, especially amongst our Irish customers who adore backing one of their own.”

Blackmore will be joined by Bryony Frost and Tabitha Worsley in the National.

Worsley, who is on 100-1 Sub Lieutenant, a horse trained by her mum, will also fancy her chance of history.

All in all, bookies expect a £100m flutter on the race.

Coral’s David Stevens said: “Although betting shops are still closed, such is the popularity of the Grand National, we are still expecting online turnover across the UK to top £100 million, as the nation welcomes back the great race after 2020’s absence.

“Twelve months ago we had to make do with a virtual Grand National, but even that was the most watched televised racing event of the year, and the most bet on, confirming the appeal of this famous sporting contest.

“While Cloth Cap is certain to start favourite after impressive wins in his last two races, we’re also braced for a huge gamble on Minella Times, the mount of Blackmore, who made history when becoming the first female rider to be crowned top jockey at last month’s Cheltenham Festival.”

Commercial content notice: Taking one of the bookmaker offers featured in this article may result in a payment to The Sun. 18+. T&Cs apply. Begambleaware.org

A responsible gambler is someone who: