BRITS were last night preparing to book summer holidays to Bognor as Boris Johnson signs off plans to put all travellers from abroad into ten-day hotel quarantine.

Travel experts say the move, which would cost families at least £1,000 extra, will wreck plans for foreign breaks.

😷 Read our coronavirus live blog for the latest news & updates

Brits thinking of booking a fortnight of sunshine were last night warned the restrictions could last months — possibly even a year until the pandemic is beaten worldwide.

Experts said families faced forking out at least £1,000 to be “imprisoned” in UK hotels once they returned, effectively putting paid to foreign hols.

Ministers will meet today to sign off the plans aimed at stopping new mutant strains entering our shores.

Boris Johnson said: “We want to make sure that we protect our population, protect this country, from re-infection from abroad.

“So that idea of looking at hotels is certainly one thing that we’re actively looking at.

“We need a solution that gives us the maximum possible protection against reinfection from abroad.”

But he offered hope of easing the national lockdown in just three weeks time with some primary schools able to open before February 15.

The Sun can reveal key exam years could also be first under “phased return” plans.

In a major boost for Brits and the pummelled economy, the Mr Johnson said he was looking at the potential of relaxing some measures ahead of the February 15 deadline to vaccinate the most vulnerable — if the death data permits.

And kids are top of the list, with parents promised two weeks notice if their children will go back.

The Sun understands schools in parts of the country where infection rates are lower may also reopen ahead of those in Covid hotspots.

Children’s Commissioner for England Anne Longfield commented: “Ultimately, children need to get back in school as soon as possible — it needs to be safe but it needs to be planned.”

The decision to ease the lockdown restrictions, possibly moving some areas into Tier 4, will depend on deaths and hospital admissions reducing.

That idea of looking at hotels is certainly one thing that we’re actively looking at.

In the meantime, the new foreign travel rules are likely to make it impossible for families to plan or book their holidays. Travel experts said they feared the quarantine system could last for a year as it has in Australia.

Paul Charles, founder and chief executive of The PC Agency, said: “There is a real fear within the industry that this could last for a year. It’s not just a short-term fix, and like Australia this could go on for some time and cut Britain off from the rest of the world.”

She said: “We implore the UK government to rethink the introduction of these extreme and sweeping border measures. WTTC is in no doubt they would destroy the UK travel and tourism sector as we know it.”

Heathrow bosses said it would be “effectively the closure of our borders”.

But Health Secretary Matt Hancock said: “I think it is incredibly important that we are cautious at the border.”

Meanwhile, hopes of easing the lockdown were boosted by another day of soaring vaccine numbers.

Almost four in five of all over-80s have now had the first dose of their Covid jab. And the total is 6.6 million — one in nine of the population.

Mr Hancock confirmed that Britain would head back to a tiered system when Britain finally begins to unlock – as The Sun revealed last week.

But he attempted to pour cold water on hopes of a swift exit, telling the Downing Street press conference “the pressure on the NHS remains huge”

Education Secretary Gavin Williamson is being hauled to the Commons today to be grilled by MPs on his roadmap for unlocking schools.

There were some glimmers of hope yesterday as the PM said he hoped to ease some of the lockdown restrictions within three weeks.

The news comes as infections fell to their lowest daily rate since before Christmas, with 22,195 people testing positive for the virus in 24 hours on Monday.

Daily deaths were also down to 592 after multiple days of more than 1,000 fatalities last week. 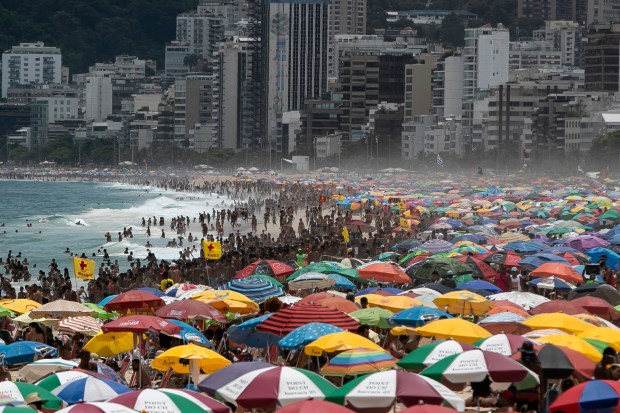 THERE was standing room only as thousands of Brazilians ignored strict a Covid crackdown and flocked to the beach.

Crowds swarmed on to Rio de Janeiro’s Ipanema Beach at the weekend, even though there are orders in place against mass gatherings.

The city’s carnival has already been cancelled this year in one of the countries hardest hit by coronavirus — with more than 200,000 deaths.

Travel to the UK has already been stopped amid fears of a potentially dangerous Covid variant which was found in Brazil.

Brits may not be able to go on holiday abroad for a year due to gov’s hotel quarantine plans, warns travel expert

Tributes pour in for Liverpool, PSG and France legend after shock death

HE'S sent the internet into overdrive by claiming he's engaged to Geordie Shore's Chloe Ferry, but Wayne Lineker is ...

KAILYN Lowry has hinted that she has a new partner as she revealed she's "very interested" in someone. The ...

Boris Johnson has refused to correct a false claim he made about funding for the body tasked with improving ...

Conservative MPs are threatening to vote against the Chancellor's plan next week if it includes huge tax hikes.Boris Johnson's ...